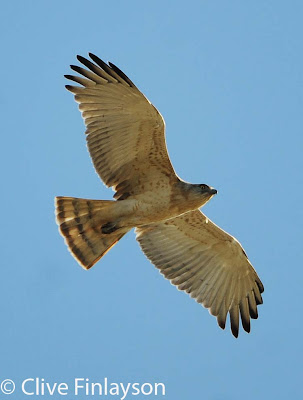 Yesterday I saw this young Short-toed Eagle over La Janda. This is a predominantly reptile hunter, though it does take other prey, and most books tell you they all go to spend the winter in tropical Africa. Before anyone jumps to the conclusion that global warming is changing the habits of this bird, I hasten to add that I have seen these majestic raptors in the area of the Strait most winters over the past 45 years. 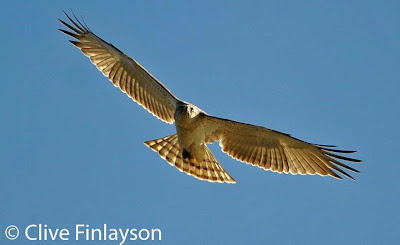 So how do they survive? For starters we have to realise that only a few do it as the carrying capacity of the area for these birds cannot now be that high. But the ones that stay seem to survive, probably on a combination of snakes, lizards and small mammals. The reason is that these lowland areas of south-western Iberia are mild. But even here the nights can be cold, temperatures dropping below zero away from the coast. But the secret is that the sun retains a position high in the sky at noon which means that it rapidly warms up, even up to 20 or more degrees Celsius in mid-winter. This generates reptile activity and food for the eagles... 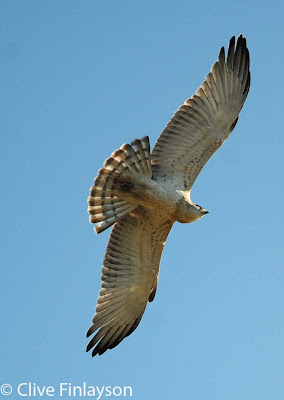 This is also the reason why many insectivorous birds also stay down here, or arrive from the north and go no further. Even obligate insect eaters, like the Crag Martin (below), winter here. This is the only European hirundine to winter north of the Sahara. I studied them many years ago and found that they survived by laying down fat reserves when conditions were favourable and surviving on these when it rained and they could not hunt. They were behaving like birds on migration throughout the winter. Adults, I found were better at it than first winter birds. In particularly bad years many young birds died and I would pick up their emaciated corpses at the base of their cave roosts. 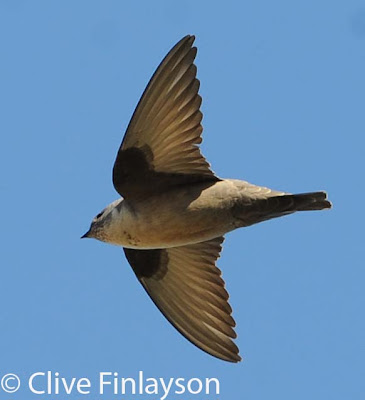 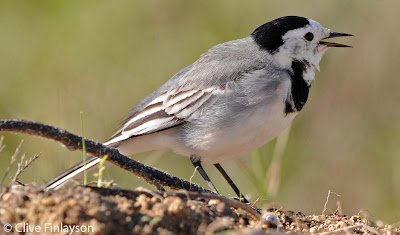 Two other largely insectivorous birds winter down here in very large numbers. White Wagtail (above) and Meadow Pipit (below) also rely on small insects, especially those that live close to water. In winter swarms of these rise in the middle of the day as temperatures rise. The ones that the wagtails and pipits miss are probably taken by the martins! 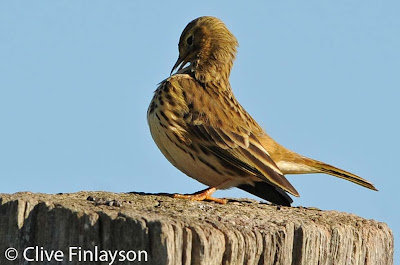 All this should not surpise us. The latitude of Gibraltar is, for example, lower than parts of North Africa. And as Abel Chapman wrote more than a century ago this is, after all, a little piece of Africa in Europe!
Posted by Clive Finlayson at 6:56 PM