Saturday was spent mostly indoors, sadly as it was a beautiful, sunny, spring day. Work demanded we focused on another of our projects - the study of the Neanderthal occupation of the Rock. We've been excavating sites, especially Gorham's Cave, for the past 20 years and they have provided unique evidence of the way of life of the Neanderthals who lived in these caves. It was here that the last Neanderthals on the planet lived some time around 24 thousand years ago. It was an ideal refuge for Neanderthals and many other species. We've identified over 140 species of fossil birds here and many species of mammal, reptile and amphibian. I'll post material on this important site from time to time. Anyway, we got through most of our work on Saturday and ended up pretty tired after spending hours looking down microscopes and staring at computer screens! Having got our tasks done it meant that a free Sunday was an unexpected bonus. 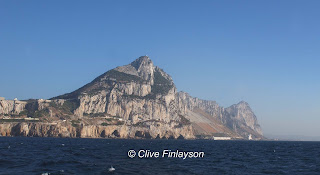 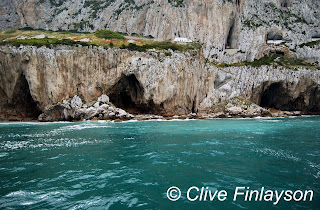 I managed a little while out in the evening. Close to Gorham's Cave two male Blue Rock Thrushes were competing for a female, their loud songs echoing against the cliffs.

Blue Rock Thrush competition
Close by Stonechats were on the move, this time of year already paired up on migration. It was still 20C as the sun went down. 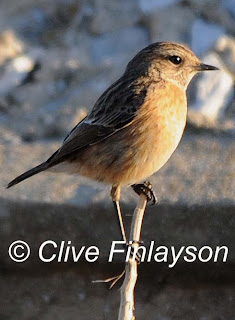