Still light outside at 1915 hours and the gulls noisy around the colony. Some seem to like trees although balancing is not always easy! Still longer days and signs of movement promises well for what lies ahead in the months to come. 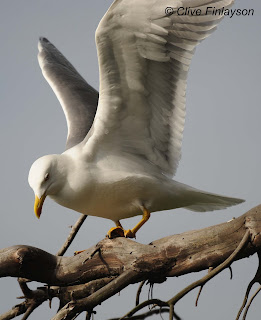 Stiff easterly winds, typical when anticyclonic conditions settle over Iberia, with some overcast keeping conditions relatively cool today. Temperature reached 17C, not as mild as at Christmas when we didn't seem to go below 20C. The Almonds on the Upper Rock are looking beautiful now. 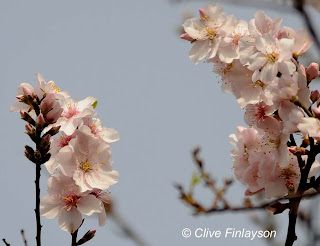 The Yellow-legged Gulls are also becoming increasingly aggressive by the day, even defying the monkeys for space! 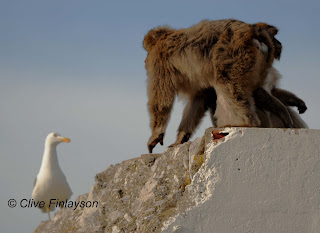 Some signs of migration. Sandwich Terns prominent at Europa Point, some adults with full black crowns. Difficult to tell if it's a local accummulation or actual migration into the Med. Here you get Sandwich Terns going east and west in spring! The med wintering birds fly out west into the Atlantic and north to the British Isles and other Atlantic sites while the Atlantic wintering birds head east to colonies in the Med and Black Sea. Adult Gannets moving west with backwind are probably migrants returning slowly towards the breeding colonies. They showed well this Christmas as south-westerly storms drove hundreds onshore.


Posted by Clive Finlayson at 7:04 PM